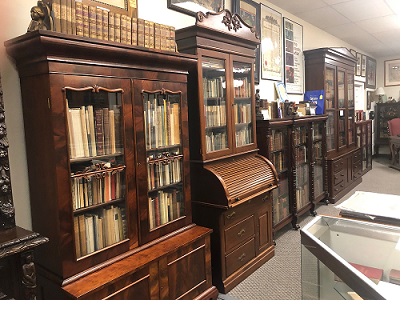 and warehouse space—there’s much more there than one might expect. In addition to a very large stock of antiquarian and rare books, they offer prints, posters, artwork, collectible magazines, comics, postcards, vinyl recordings, and memorabilia.

Ron Cozzi, the owner of Old Editions, started out in a second floor location he called the Buffalo Book Studio in late 1974. Within days of the opening a natural disaster in the form of a serious blizzard blanketed the area, the National Guard and Army Reserves were called in to rescue life, limb and property, and Ron was shut out of his newly-opened shop for 3 months. An unusual beginning for any business. They can be reached at (716) 842-1734 and a selection of recent acquistions or other noteworthy or outstanding items can be found on their e-Bay page.