The Morgan Library & Museum proudly presents Holbein: Capturing Character, opening February 11, 2022, and running through May 15, 2022.  Co-organized with the J. Paul Getty Museum, Los Angeles, this marks the first major U.S. exhibition dedicated to the art of Hans Holbein the Younger (1497/98–1543).  The Morgan’s display will feature around sixty objects from over twenty lenders across the globe, including thirty-one paintings and drawings by Holbein himself. 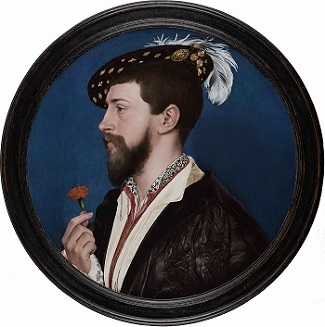 Hans Holbein the Younger was among the most skilled, versatile, and inventive European artists of the sixteenth century.  He created captivating portraits of courtiers, merchants, scholars, and statesmen in Basel, Switzerland, and later in England, and served as a court painter to King Henry VIII (1491–1547).  Enriched by inscriptions, insignia, and evocative attributes, his portraits not only conveyed truthful likenesses but also celebrated the individuals’ identities, values, aspirations, and achievements.

Spanning the artist’s entire career, Holbein: Capturing Character begins with the artist’s early years in Basel, where he was active in the book trade and created iconic portraits of the great humanist scholar Erasmus of Rotterdam (1466–1536). Holbein stayed in England from 1526 to 1528 and moved there permanently in 1532, quickly becoming the most sought-after artist among nobles, courtiers, and the German merchants of the Hanseatic League. In addition to displaying superb examples of Holbein’s drawn and painted likenesses of his sitters, the exhibition also explores the artist’s activities as a designer of prints, book illustrations, personal devices (emblems accompanied by mottos), and jewels. The Morgan’s presentation will also include a section devoted to the development of Holbein and Hans Lützelburger’s (d. 1526) Images of Death (ca. 1526 and 1538)—the renowned series of forty woodcuts that is the masterwork of both artists in this medium. Works by Holbein’s famed contemporaries, such as Jan Gossaert (ca. 1478–1532) and Quentin Metsys (1466–1530), and a display of intricate period jewelry and book bindings offer further insights into the cultural interest in the representation of individual identity that developed in that period. Taken as a whole, the exhibition demonstrates the visual splendor of the art and culture of the time.

Also included in the exhibition is Holbein’s Simon George (ca. 1535–40). In this vibrant painting, Simon George of Cornwall is portrayed in profile, in a manner modeled on antique coins and portrait medals. Nothing but the sitter’s name and place of origin is known today. Yet the complex system of symbols that Holbein developed in this work suggests that the young man might have been a poet conversant in the symbolic language of love. Recent conservation of the panel will allow viewers to fully appreciate Holbein’s vivid colors and rich surface effects—from the carefully modulated description of George’s skin to the black embroidery of his glossy, puckered jacket. The portrait will be displayed alongside Holbein’s drawn preparatory
study. Lent by Her Majesty Queen Elizabeth II, the sheet exemplifies the delicately layered drawing technique which the artist employed to capture the profile of Simon George of Cornwall, going as far as describing individual wispy hairs that form the sitter’s eyebrow and stubble.

Holbein’s portrait study of William Parr, Marquess of Northampton (ca. 1538–42), is another fascinating drawing on view in the exhibition. William Parr (1513–1571) was the brother of Catherine Parr, the sixth and final wife of King Henry VIII. Renowned for his good looks and good taste, the sitter was depicted by Holbein wearing a fur-edged gown made of white and
purple velvet and satin (as indicated by the artist’s inscriptions). Exclusive to the Morgan’s exhibition is Sir Thomas More (1527)—one of the masterpieces of Holbein’s first stay in England—depicting the philosopher, statesman and humanist at the height of his political career. More sat for Holbein shortly before he was promoted to Lord Chancellor, the highest-ranking office in Tudor England. Holbein presents his sitter as an authoritative statesman, prominently adorned with a golden chain of office. The S-shaped links might stand in for the motto “Souvent me souvient” (Think of me often), while a Tudor rose at the center is the traditional heraldic emblem of England and a symbol of More’s service to the king. The portrait exemplifies Holbein’s ability to render colors and textures—from More’s graying stubble to the opulent fur trim of his coat and the lush, voluminous red-velvet sleeves of his doublet. The painting—a loan from The Frick Collection, New York—is one of the masterpieces of that institution’s holdings.

The Morgan’s Director, Colin B. Bailey, said, “We are extraordinarily excited to bring a Hans Holbein the Younger exhibition of this magnitude to the Morgan in partnership with the Getty Museum in Los Angeles. This multi-disciplinary show, with its exceptional loans, is the first of its kind in the United States; it will give museum goers the opportunity to experience first-hand signal examples from the career of one of the most engaging artists of the European Renaissance.”

A catalogue accompanies the exhibition: Holbein: Capturing Character, edited by Anne T. Woollett, with contributions by Morgan curators Austėja Mackelaitė and John T. McQuillen, Ulrich Hans Birkmaier, Peter van der Coelen, and John Oliver Hand. It includes five essays that explore Holbein’s relationships to his patrons and other artists of his time, examines his role as a creative force within a vibrant humanist network, and offers new insights into the issue of identity and representation in early modern Europe.