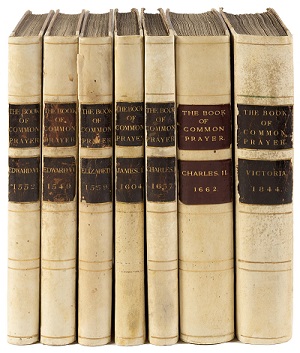 Highlighting the sale is a rare, complete set in seven volumes of William Pickering's printing of the historical Book of Common Prayer, as issued by the different English monarchs. Typographic facsimiles of the original black letter editions, each volume is magnificently printed handsomely bound in the original vellum over marbled boards with ornamental title pages and decorative head and tailpieces (est. $3,000-$5,000).

A number of documents related to the Napoleonic era include a Napoleon signed letter. Written in August of 1797 during the Italian Campaign in which Napoleon, then General in Chief of the Army of Italy, gained much of his early fame, Napoleon directs procedure for the confiscation and distribution of rations and other goods, requests an intelligence officer for a planned raid, and describes other specific tasks for his officers (est. $1,000-$1,500).

A unique manuscript ledger and cutlery design book from the Argyle Cutlery Works in Sheffield, England is illustrated throughout with pen and ink knife designs. Dating from the early 20th century, the lot also contains other bits of ephemera including an invoice and business card from the business. The Argyle Cutlery Works was one of numerous Sheffield businesses that exported pocket knives, soldiers' knives, and cutlery to the world market (est. $1,000-$1,500).