Imperial Splendor: The Art of the Book in the Holy Roman Empire 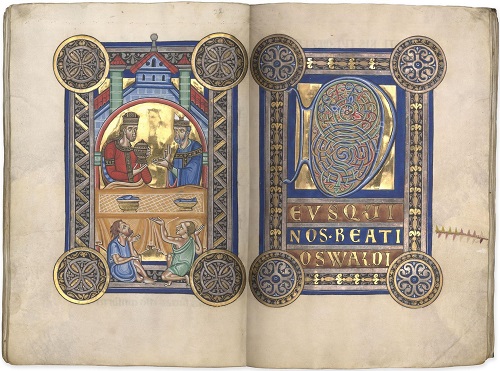 sweeping overview of manuscript production in the Holy Roman Empire – a complex of territories in Western, Central and Southern Europe – which represents one of the most impressive chapters in the history of medieval art.

While little known and rarely seen by the general public, these illuminated manuscripts count among the most luxurious works of art from the Middle Ages. Designed to edify, to entertain, and above all to embody the sacred, these manuscripts and their spectacular illuminations retain the ability to dazzle and inspire modern audiences just as they did those of the Middle Ages.

Bringing together some seventy manuscripts from collections across the country, the exhibition begins with the reforms initiated in the early ninth century by Charlemagne the first emperor following the fall of Rome. It ends with the flurry of artistic innovation coinciding with the invention of the printing press and the onset of humanism in the fifteenth century. As the first major presentation of this subject in the English-speaking world, Imperial Splendor introduces visitors to fundamental aspects of this history, including how artists developed a visual rhetoric of power, the role of the aristocratic elite in the production and patronage of manuscripts, and the impact of Albrecht Dürer and humanism on the arts of the book.