Seventy-five choice lots of rare and valuable Americana and cartography drew strong interest in PBA Galleries’ July 8th auction. The sale was highlighted by an amazing record price of $361,500 (including the buyer’s premium) for the first book printed in California, 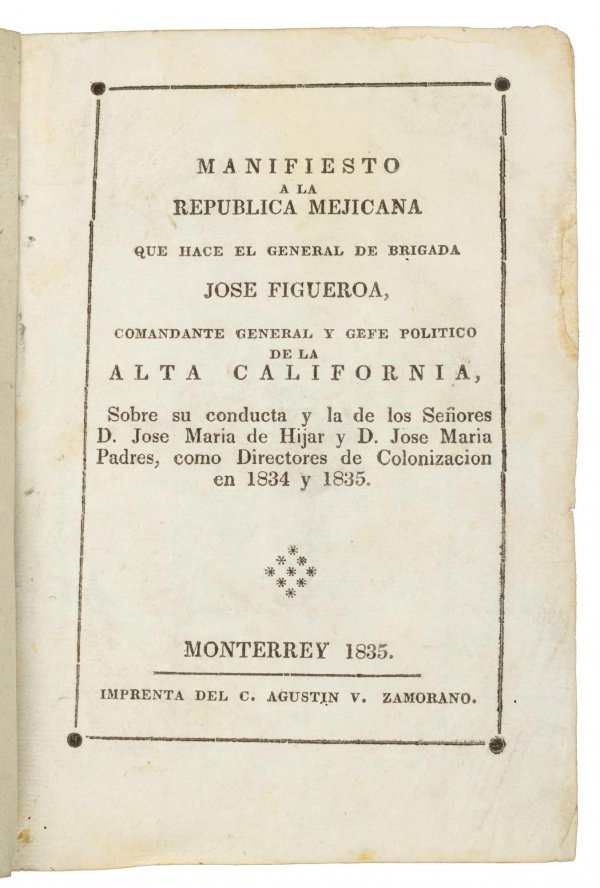 José Figueroa’s Manifiesto a la Republica Mejicana, 1835, the then-governor of California’s defense of his policies and actions in connection with the Hijar and Padrés colonization scheme. Though the scheme and its relation to the secularization of the California mission properties is of great importance to historians and scholars, that is overshadowed today by its significance as the first substantial book printed in California, and undoubtedly the most important book produced in California during the Mexican period, printed by California's first printer, Agustin V. Zamorano.  For this, the book is rewarded with a prime position in the Zamorano 80, a list of the eighty most important and influential books on California and its history compiled by members of the Los Angeles-based bibliophilic organization, the Zamorano Club, with the list published in 1945. Of the estimated 19 copies of the book extant, only five are believed to be in private hands.

The price achieved at PBA Galleries shattered the previous auction record of $40,250, set by the Plath-Robbins copy sold at PBA in 1996, with two copies selling in 1994 and 2003 for $34,500 each, both at auctions conducted by the late Dorothy Sloan. Indeed, the book also bested itself by a considerable margin – the Estelle Doheny copy, previously sold at Christie’s in 1988 for $15,400. The book also set another milestone by a wide mark – the highest price brought at auction for a book on the Zamorano 80 list., previously held by Lansford Hastings’ The Emigrants' Guide, to Oregon and California, 1845, at $194,500, was nearly doubled by the Figueroa.

Other highlights from the auction include a striking lithograph of Sacramento in 1857.  A Birds-Eye View of Sacramento, "The City of the Plain", by George H. Baker, 1857, considered the greatest of gold rush-era lithographs of the city, the central image surrounded by pictorial vignettes sold for $9,600.

Rare account of East Indies & Brazil, 1582, Fernão Lopes de Castenheda’s Conquest of the East Indias, the rare 1582 English edition, with an account of the discovery of Brazil by Cabral, sold for $15,600.

An original watercolor by Margaret Van Houton, recording her and her family’s crossing of the Isthmus of Panama circa 1852, a significant work by an early female California artist, sold for $3,600.