Hindman’s fall fine art auctions shattered expectations once again, selling above and beyond presale estimates.  The four sales together fetched more than $7.5 million across three days, led by the sale of two works by American master, Alexander Calder. 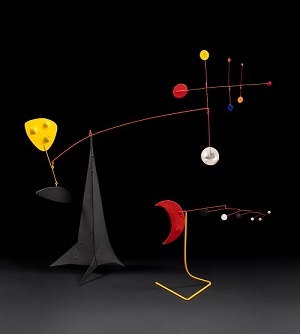 “We were delighted by the performance of the sales last week - the success of these auctions once again proves the art market is stronger than ever,” said Joe Stanfield, Director of Fine Art for Hindman.  “Strong bidder engagement and impressive prices realized continue to drive the market, and the caliber of works we are offering are benefitting greatly from this highly performing market.”

Hindman’s Post War and Contemporary Art auction (October 1) was an outstanding success.  Led by two works by Alexander Calder, the auction finished the day at $4.2 million against the sale’s presale estimate of $2.5 million.  In addition to the top lots of the auction, works by Chicago Imagist artists, once again saw strong results with Gladys Nilsson’s 1965 oil on canvas, Untitled (Hairy Legged, Star Tattooed Giantess in Striped Dress Skipping Rope), selling for $162,500 against a presale estimate of $40,000-60,000 making it the third highest selling lot of the sale.

Alexander Calder’s standing mobile, Triple Cross, 1947, more than tripled its pre-sale estimate.  The work was one of two offered at the Thursday auction by one of the most the revolutionary artists of the 20th century.  Triple Cross, 1947, held a pre-sale estimate of $600,000-$800,000, and set a record for the highest sale price ($1,872,000) in the Chicago auction house’s 38-year history.  The Calder was a part of the estate of Joan Conway Crancer, the only daughter of legendary St. Louis artist Fred Conway. Crancer and her husband were avid supporters of the arts community in St. Louis and were savvy collectors.  Another Calder, Petit Poteau Jaune (Little Yellow Post), 1963 from the Crancer Estate was also sold in the October 1 auction.  This work was offered with a presale estimate of $200,000-300,000 and sold for $432,500.

The American and European Art auction also saw strong results, selling a total of $1.8 million against a presale estimate of $1 million.  The sale was highlighted by a number of important works, many from the Crancer Estate, including the top lot of the auction, Simon-Joseph-Alexandre Clément Denis’ oil on panel, A View to the Cascades of Tivoli from 1790.  The expansive landscape depicted in this work is further enhanced by the figures of Madame Vigée Lebrun and her 14-year old daughter sitting under a tree and sketching the cascades.  This work fetched more than twelve times the $10,000-$15,000 estimate, ultimately selling for $125,000.

A number of exciting American works were also included and achieved great success.  Neil Welliver’s, 1974 sprawling landscape, From Zeke, held a presale estimate of $15,000-25,000 and sold for $81,250 setting a world auction record for the artist.  In addition, Daniel Garber’s work from the early twentieth century, depicting the scene of an antique store, entitled Barrett's Nook, in Solesbury, Pennsylvania realized $75,000 with a presale estimate of $10,000-15,000.  Works by Marvin Cone, Grant Wood and Dale Nichols also sold well above their presale estimates.

The October 2, Prints and Multiples Auction was highlighted by a selection of important works by Andy Warhol, David Hockney, Roy Lichtenstein, M.C. Escher and Jasper Johns.  The demand for works by blue-chip artists continues with iconic images once again seeing top results.

Two of the day’s top lots were works by Andy Warhol.  His commissioned portraits are some of his most iconic works and among the most popular.  Jane Fonda’s portrait, in three unique screenprints, was published to raise funds for her then husband Tom Hayden’s political campaign.  These works, arranged as a triptych, were estimated at $70,000-90,000 and brought $125,000.  Another one of his famous portraits, Liz, an offset lithograph from 1964 was estimated at $20,000-30,000 and sold for a total of $52,500.

Hindman is now welcoming consignments for upcoming Fine Art auctions. For more information about this and upcoming sales, call (312) 280-1212.