Swann Galleries’ summer sale of Vintage Posters on Wednesday, August 7 was a lively event with active bidding across all platforms. “Many of the auction's niche collecting categories saw heated competition for trophy pieces, including sections on propaganda, sports and auto racing, as well as beach and summer resort posters,” noted Nicholas D. Lowry, Vintage Posters Director and house President. The sale saw six record prices and brought a number of posters to market for the first time.

The house’s most extensive selection of automobile posters to date saw competitive bidding from car aficionados. Highlights included a 1970 ad for Porsche prominently featuring actor Steve McQueen, which earned a record $7,000 over a high estimate of $1,200; 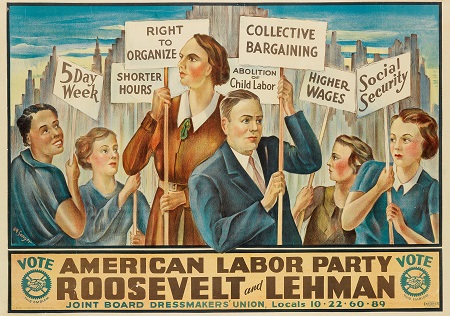 Sergio Trujillo Magnenat’s advertisements for the first Bolivarian Games in 1938 proved to be successful in his market debut, with all of the four works on offer finding buyers. His designs promoting track-and-field events—javelin, and discus—earned $4,160 apiece, while the designs for tennis and polo were won for $4,000 and $2,470, respectively.

War and political propaganda included William Sanger’s 1936 campaign poster for Roosevelt and Lehman, a first at auction for the image and a record for the artist at $7,250.  James Montgomery Flagg was present with his iconic 1917 image featuring Uncle Sam, I Want You for U.S. Army, and his circa 1918 call to join the marines featuring a soldier riding a leopard ($4,940 and $5,500, respectively). Howard Chandler Christy’s Aviation / Fly with the U.S. Marines, 1920, rounded out the selection at $6,750.

The sale was led by Alphonse Mucha’s The Seasons, four decorative panels on silk, 1900, at $14,300. Also by Mucha was Lance Parfum Rodo, 1896, an early work by the artist denoted by the muse’s hairstyle which would become much more ornamental and flowing in later works ($6,750). Further Art Nouveau highlights included Adrien Barrère’s circa 1909 movie poster, Cinéma Pathé / Tous y Mènent Leurs Enfants!, at $8,750, and Francisco Tamagno’s 1909 Terrot & Co. cycle advertisement, which brought a record for the image at $4,160.

Additional records included Günther Kieser’s 1968 concert poster for The Doors and the Canned Heat at $5,250 and Erik Nitsche’s USS Nautilus / General Dynamics, 1955, at $5,000.

The next auction from the Vintage Posters department will be Rare & Important Travel Posters on November 14. Visit swanngalleries.com or download the Swann Galleries App for catalogues, bidding and inquiries.

The top lots  (with buyer’s premium) include:

For more information, contact the specialist, Nicholas D. Lowry at (212) 254-4710, extension 57 or at posters@swanngalleries.com.