Autographs on March 21, 2019 at Swann Galleries saw significant interest in Americana, scientists and popular figures. Of the sale Marco Tomaschett, the house’s autographs Specialist, noted –  “Highest prices were mostly for historical autographs, demonstrating that the broad interest in history continues.”

A 1776 autograph letter signed by Joseph Brant, Thayeadanegea–the leader of the Mohawk people and military, and British Loyalist–writing with news after he had been in England meeting with King George III, 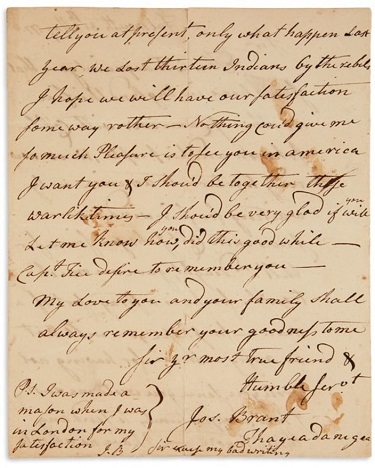 recounting events related to the American rebels, brought $35,000, a record for a letter by Brant.

Founding Fathers were also popular, with a 1793 ALS by Alexander Hamilton, as Secretary of the Treasury, to the President and Directors of the Bank of the U.S. expressing that they will receive an appropriation for giving advances to the Mint ($12,500); George Washington’s signed ticket for the Mountain Road Lottery from 1768 fetched $8,450; two autograph documents signed from 1764 and 1765 concerning payment for services rendered in various lawsuits by John Adams brought $3,900; and a 1792 printed document signed by Thomas Jefferson as Secretary of State, sold for $5,000.

An 1875 photograph signed and dated by Ulysses S. Grant led an assortment of signatures from U.S. Presidents, earning $10,000. A partly-printed document signed by Abraham Lincoln, appointing John T. Hogeboom as Appraiser of Merchandise in April of 1864, brought $5,500, and a group of five typed letters, signed by Theodore Roosevelt from 1902-05 to his sister Corrine Roosevelt Robinson, was won for $3,380.

Of British interest was a group of six ALS from 1989-92 by Diana, Princess of Wales, to her friend Elizabeth Tilberis, the editor of British Vogue and Harper’s Bazaar, as well as an 1884 ALS by Queen Victoria to Alfred, Lord Tennyson, expressing her sorrows over the death of her son Leopold ($10,400 and $5,750, respectively).

Scientists and inventors were represented with a 1944 ink-and-wash portrait by Charlotte Berend-Corinth of Albert Einstein, signed by the physicist, at $9,100; two offprints signed by Linus Pauling, which featured his articles The Nature of the Chemical Bond, 1931, and Ascorbic Acid and Cancer, 1979, brought $4,500, and Nikola Tesla’s 1935 signed monogrammed correspondence card sold for $4,250.

Additional highlights included a 1950-56 guestbook for Lüchow’s–a New York City restaurant that was a popular meeting place for the city’s entertainers, artists, musicians and athletes. The book featured over 400 signatures from the likes of Joe DiMaggio, Al Hirschfeld, Grace Kelly, Joan Miró, Cole Porter, Eleanor Roosevelt and Barbara Streisand, and sold for $6,500. Charles B. Driscoll’s personal copy of his book Doubloons, with over 500 signatures and inscriptions from the 1930s-40s, sold for $4,750. The first edition featured authors, artists, entertainer and others, including Einstein, Aldous Huxley and Thomas Wolfe’s signatures on the same page.