The runaway top lot of the sale was Across the Continent, 1868, a Currier & Ives print depicting 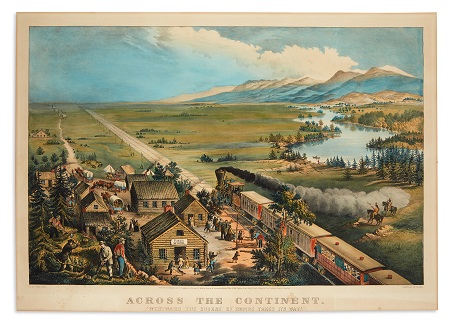 the changing landscape of the mid nineteenth-century American frontier upon the completion of the Transcontinental Railroads. Significant for its subject matter and memorable provenance, the work came across the block, by descent, from the noteworthy collection of Thomas Winthrop Streeter who was given the lithograph on his 80th birthday by his children. Across the Continent reached $62,500 – a record for the print.

Maps and atlases represented a generous portion of the sale with several lots taking top spots and setting records. Maps included Samuel de Champlain’s scarce 1664 record of his later discoveries in Canada with $22,500, and John Overton’s New and Most Exact Map of America from 1671 with $11,875. Additional cartographic material featured a chart of the middle Atlantic Coast including New York, New Jersey, Pennsylvania, Maryland, Virginia and North Carolina by Joseph Frederick Wallet Des Barres ($13,750); Joan Vingboons’ Caarte van Westindien, circa 1700, a large engraved chart of Florida, Mexico, Central America and the Caribbean ($10,625); and a 1676 New and Accurate Map of the World by John Speed ($9,375).  Atlases included George Woolworth Colton’s Atlas of America on the physical and political geography of North and South America and the West India Islands, which set a record with $11,250, and a first edition of a rare atlas of Spanish-controlled harbors in North America, Central America and the Caribbean, which earned $11,700.

Additional highlights from color plate books included John James Audubon’s The Birds of America, 1859, which featured seven volumes and 500 tinted and hand-colored lithograph plates. The publication was offered together with Audubon’s The Quadrupeds of North America and reached $16,250. 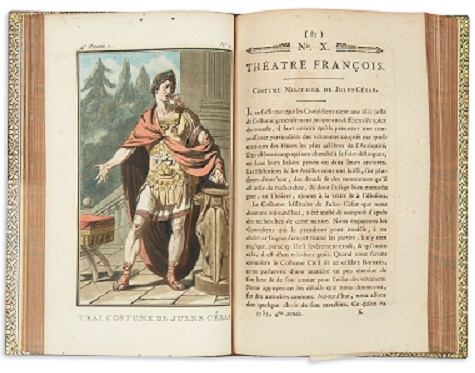 A run of Japanese material was led by a color woodblock map of Uraga and Edo Bay relating to Commodore Matthew Perry and His Black Ships at $15,600. Additional Perry material included a manuscript report on the arrival of the commodore, featuring two large portraits of Perry and Commander Henry A. Adams, which was sold for $6,500. A panoramic color woodblock map of the roadways, waterways, cities, towns and topography of the entire island chain of Japan; and a large Edo-period woodblock Japanese atlas and encyclopedia were won for $8,450 each.

Caleb Kiffer, Specialist of Maps & Atlases, noted of the sale, “In many ways this sale showed a great confidence in the antique map market with more interest than has been seen and strong prices to back that up. It was also encouraging to witness a surge in the middle-market items. The highlight of the sale, Currier & Ives' Across the Continent was an exceptional result. It is a beautiful, historic image, but it was the fact that it was such a meaningful piece of Thomas Winthrop Streeter's personal collection that propelled it into record territory.”

The next auction of Maps & Atlases, Natural History & Color Plate Books at Swann Galleries will be on June 6, 2019. The house is currently accepting quality consignments.