Alphonse Mucha’s Times of the Day

The auction offered an unusually broad selection of food and drink posters, with sections devoted to Leonetto Cappiello 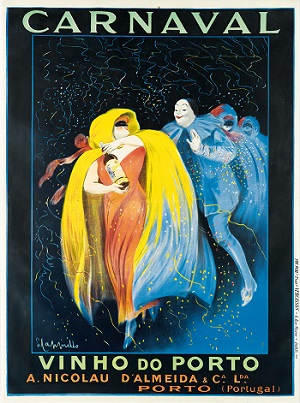 and Luciano Achille Mauzan. The former's Carnaval / Vinho do Porto, 1911, brought $18,750. Manuel Orazi’s Ligue Vinicole de France, 1901, an elegant image positioning wine as the wholesome answer to the modern world’s ills, brought a record $10,625. Ludwig Hohlwein’s Kathreiner Weine, 1913, was purchased by an institution for $4,750. As a firm counterargument to the virtues of a perfectly aged bottle of wine, a group of 20 small-format posters issued by the American Temperance Society sold for $2,125.

Wartime propaganda, for which these sales are known, included both marketplace mainstays and surprises. Among top lots were perhaps the two most iconic posters in the world: James Montgomery Flagg’s I Want You brought $10,000, while the anonymously designed Keep Calm and Carry On, a 1939 image from Great Britain’s propaganda efforts in WWII, sold for $12,500. Soviet Constructivist images performed well, with posters by Gustav Klutsis and Nikolai Andreevich Dolgorukov among the top lots ($9,375 and $6,750, respectively). Two posters designed by Arthur Szyk in the 1940s for the war effort, encouraging American soldiers to “Fool the Axis – Use Prophylaxis,” sold for $4,750 and $4,000, new auction records over estimates of just $800 to $1,200 apiece.

Nicholas Lowry, Swann Galleries’ President and Director of Vintage Posters, noted that “the results were representative of the kind of poster passion that has driven the success of these auctions over the last two decades. As is usual in our August sales, WWI and WWII propaganda and Art Nouveau performed well, but unexpected highlights also indicate a buoyant market for psychedelic, protest, artist and exhibition posters.”

The next auction of Vintage Posters at Swann Galleries, Rare & Important Travel Posters, is scheduled for October 25, 2018. Swann Galleries holds at least five poster auctions each year and is currently accepting quality consignments for auctions in 2019.