The Ephemera of Protest

Parents and pundits have been mulling over why American youth are not protesting the current administration’s waging of war with as much fervor as they did LBJ’s and Nixon’s handling of Viet Nam. There are obvious differences in the conflicts (no military draft springs to mind) and in the culture. But it is also obvious when you look at the ephemera generated in the protest years of the 1960s and early 1970s that anti-war sentiment thrived on a vibrant, creative, epochal shift. You didn’t even need to be a political radical to feel the stirrings of belonging to something new, large, colorful.

An Art Commune in the Wake of Kent State 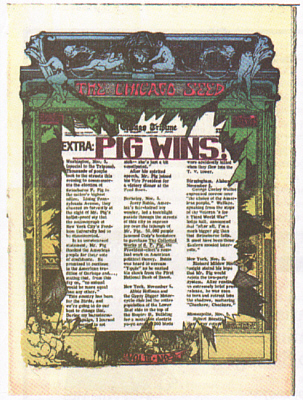 The anti-war movement (embracing all manner of other protests against social injustices) both adopted and created street art from the psychedelic whorls of rock promotion. In the tense three months May through July of 1970 – when the killings at Kent State and the escalation of the war into Cambodia shocked the country – a commune of young artists at the Boston Museum of Fine Arts School produced a blizzard of silk-screened posters: over a hundred different designs, thousands of images to be plastered throughout Boston.

The commune’s output had the advantage of good materials – inks, rag poster paper (about 250,000 sheets from Wheelwright Paper Company), screen presses. The Dean of the Museum School, William Bagnall, a Quaker and a conscientious objector in World War II, moved into the school with a sleeping bag to contain the student strike by supporting the poster project [M.I.T. also raised $2,100 for supplies with a sherry party]. In 1980 Bagnall said that the events of 1970 were “not a revolution, but an evolution. It was a dynamic force none of us could control or foresee. I did not see the strike as political. … in essence the protests that hit the street were a cry asking for help before we killed ourselves.”

Many of the designs incorporated newsphoto images of the Kent State killings. The simplest version reproduced entire the front page of a Boston newspaper with photos of the National Guardsmen and the slain students. Others paired photos with Spiro Agnew quotes about the “nabobs” of privilege; with the slogans: “When dissent turns to violence,” “Unite Now,” “There is no protection from the police;” with a dictionary definition of “oppression;” with Carl Sandburg’s “Pile the bodies high at Austerlitz and Waterloo, Shovel them under and let me work – I am the grass; I cover all.” A particularly powerful design placed the photograph of the anguished spectator kneeling over a body in the blue area of an American flag.

A decade after, one of the commune artists, Andy Block, remembered: “A lot of people believed in something for the first time in their lives. We were putting out posters 24 hours a day. Anyone who wanted to come in and play could. It was the first time the equipment was available to everyone. We’d put [the posters] out factory style and pile them out in the lobby. People would come in and take handfuls to distribute.”

Another student, Kevin Hipe, commented: “We set up a thing that actually worked. Everyone got to do his own poster. In the design room you would pick an image and discuss your design with others. Gradually about 600 people learned the process of photo silkscreen. A bank examiner with a big position came in to help – just a regular guy. I liked him and the fact that he would join a scruffy bunch like us. It gave the effort added power that we could work together.” 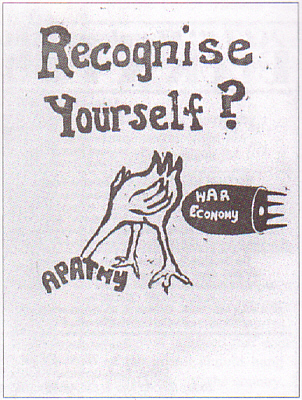 The excitement of this artistic democracy matched the yearning for a say in national politics. The posters were designed to shock Bostonians into awareness, but few promoted anarchy. Several posters were designed with the same slogan: “Let the People Vote on War” or “Vote Yes for Peace.” Others identified which Massachusetts congressman to write to, which Boston city councilman was sympathetic. The art students reached out to anyone they believed might still have their heads in the sand – “Recognize Yourself?” They were no longer being acted upon but were acting.

Ed Rothfarb created many of the more literary images – quoting Hemingway, Sandburg and the Beats. Arguably the hardest-hitting design incorporated lines from Allen Ginsberg’s “America” (which appeared in an anthology published by San Francisco’s City Lights Books, number four in The Pocket Poets Series: Howl and other poems Allen Ginsberg Introduction by William Carlos Williams– this year enjoying its 50th anniversary in print). The words appear in the white stripes of an American flag – a shock in dripping red:

“AMERICA you really
don’t want to go to war
why are your libraries
full of tears AMERICA
when will we end the human war
go fuck yourself with your atom bomb
AMERICA this is quite serious.”

Rothfarb doubts that Ginsberg would have liked the rearranged lines. But a former Librarian of Congress believed that copies of the poster should hang in every library in the country. In 1980 Rothfarb concluded: “That whole time had an effect on art: performance, conceptual art, alternative spaces were all direct outgrowths. The seventies were an articulation and blossoming as a result of the sixties. The Women’s movement, national liberation groups, ecology, gay rights – even self realization – all were natural successors to that time…We were entering the New Age then and no one realized it. Our government is still in the same place, sending troops to protect business interests and we still support it.”

In 1980, student Danny Risden was also pessimistic about any lasting change in government: “I was asked to help at the poster workshop and stayed up a week, working all night. People came to us with their projects. Posters were made for all comers, we had the technology and no discretion. In a highly technological society, technology is indistinguishable from magic. The world is like a computer chip and 1984 is here already.” How much more so in our 21st century world.

Burn-out of the New Left

The contrast of these posters and other artistic output of the 1960s with the earnest drabness of early 1950s counter-culture is startling. A good collection that covers both was saved by father and son radicals. [Stanford University’s Green Library, Department of Special Collections: “The Joseph R. Starobin and Robert S. Starobin Papers, 1945-76” M0675, organized in 46 boxes spanning 24 linear feet with a complete collection guide available from Online Archive of California.]

The son, Robert Starobin, born a Red Diaper baby in 1940 cut his teeth on radicalism – but he also managed to be in the “hot spots” of protest. From writing against nuclear testing, race discrimination and the House Un-American Activities Committee at Cornell in the late 1950s; to hitch-hiking to Berkeley where he energetically participated in the Free Speech Movement, Students for a Democratic Society, and the black power movement; to the University of Wisconsin-Madison in 1966 where he sided with his students in pushing for reform on campus and in protesting the war in Viet Nam, as well as pioneering the first black studies course. His death by suicide in 1971 (while teaching at SUNY Binghamton and pursuing a postdoctoral research fellowship from the Cornell Society for the Humanities) has been called an American tragedy [see Alex Lichtenstein “Industrial Slavery and The Tragedy of Robert Starobin” in American Retrospectives: Historians on Historians, ed. Stanley I. Kutler, Johns Hopkins University Press 1995]. His personal life was played out in the maelstrom of 1960s politics of dissent and he became a man buffeted by the major conflicts of the decade.

The father Joseph Starobin had been foreign editor for New Masses and then of the Daily Worker from 1945 to 1954 while also being in charge of the Communist Party USA’s peace activities. He withdrew his membership in the Party in 1954 stating later in a university application: “that whatever the merits of Communism for other countries, about which I had increasing reservations, its precepts could not be applied in the United States.” He continued, however, to espouse Leftist causes and wrote articles towards Socialist Reform. In 1963 he applied to a Ph.D. program in history at Columbia University specifically hoping to be able to fuse his Past with his son’s Present. To little avail. The two men disagreed on many aspects of dissent. The 1972 published version of Joseph Starobin’s dissertation: American Communism in Crisis: 1943-1957 was dedicated with obvious anguish: “To our dear Bob / Unhappy warrior for great causes / Who did not want to stay the course.” 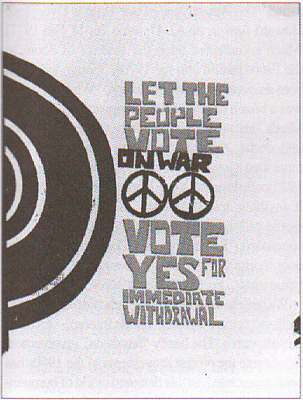 The ephemera that Robert Starobin saved appears in a plethora of formats, the colors alone showing the extraordinary energy of campus radical activity at Berkeley, Cornell, and Madison: the west, the east, and the middle. The Leviathan, the Kaleidoscope, the Berkeley Tribe, the San Francisco Cream, the Peace & Freedom National Organizer, the Crazy Times. Some of the publications mention Robert’s involvements (a May 1970 Cornell Daily Sun shows him in a cover photo tossing flowers from a “peace tank” after a demonstration against ROTC on campus), but most just cover the issues he was interested in. Illustrated here is the cover to the November 1968 issue of The Chicago Seed, covering Nixon’s election – “The Pig Wins.”

Graphic artists, poets, radical politicians, academics and hedonistic camp followers – everyone could join in the excitement. Joseph Starobin wasn’t alone in fearing that the energy of the New Left would burn out in flamboyant protest. In the month that Robert Starobin died, Rolling Stone magazine published an article called “The Apocalypse of our Time is Over” [see Howard Junker, pp 42-47, issue 76, 18 Feb 1971] which commented upon the absence of doom as the 1960s passed into the 1970s, though there had been an overabundance of rhetoric: “What happened was a bunch of people, including some of our Best Minds, beat an age-old, infinitely reusable metaphor into cliché. And so apocalyptic now means little more than apoplectic.” Renata Adler introduced her 1970 collection of New Yorker essays as “about, if anything, true radicalism, as opposed to what I would call the mere mentality of apocalypse.” She concluded: “Some of us have despaired, and in the only indisputably sincere expression of the apocalyptic vision, immolated themselves.”

We have to assume that true radicalism is alive and well and communicating via the Internet – a virtual protest march. The heady “hands on” involvement to promote the protest movements of the 1960s has been superceded. In this flattened world of burgeoning global commerce, the hopes of the younger generation of thoughtful Americans are perhaps less idealistic. But they may be more realistic – certainly they can be more broadly integrated. We may have to “lend a hand” by listening differently.

[Thanks to Marybeth Pettit who conducted the 1980 interviews with the former Boston Musum School students.]

Diane DeBlois, partner for twenty three years in aGatherin’ with Robert Dalton Harris, specializes in manuscript and printed ephemera. She writes on ephemera for several publications in the paper and stamp collecting fields and for the Journal of Commercial Archeology. For more information on ephemera, contact The Ephemera Society of America, Inc., Box 95, Cazenovia, NY 13035.